Evology is the study of evolutionary process of various species from fossils species to living species. It studies the origin, evolution, interrelationship of individual species, classes and the whole organic world. The aim of the study is to explain
the causes, process, and consequences of events happened since the Earth appeared, and which is still unknown to people today. It analyzes evolution mechanism – from molecular level to macroscopic conditions that organisms have undergone in evolution. Among them, evolutionary biology is the integrated science of evolution, ecology, behavior and systematics.

Of the 4.6 billion years (4.6 Ga, 4600 Ma) of the Earth’s history, geological time scale is divided into five main periods: Archaen eon (undefined to 2.5Ga); Proterozoic eon (2.5Ga-542Ma); Paleozoic era, (542-251Ma); Mesozoic era (251-66Ma) and Cenozoic era (66Ma-present). The earliest known life record appeared 3.5 billion years ago, which belonged to Paleoarchaen era (3.6-3.2Ga). From the records of fossils, fish should have appeared between Cambrian period (542-488Ma) and Ordovician period (488-444Ma).
This period is also called Early Paleozoic Era. Chordates dominated the world – in the ocean, including trilobite and ammonite. In other words, “fish” appeared 3 billion years later after organisms appeared on the Earth. It was such a long time!

Before talking about the evolution of fish, it is important to define the organic group “fish” first. As mentioned earlier in taxonomy, we need to have fundamental knowledge about a thing before we can move on to discuss the issue, and fish
is no exception.

So, what kind of organism is fish? To what extent that an organism has evolved, or what feature does it have to possess in order to qualify as a fish? After more than 200 years of study, scientists have come up with a precise definition and a rough definition.

 A precise definition (Berra, 1981)
A poikilothermic, aquatic chordate with appendages (when present) developed as fins, whose chief respiratory organs are gills and whose body is usually covered with scales.

A rough definition (Nelson, 1994)
Aquatic vertebrate with gills and with limbs in the shape of fins.

Actually, the family tree of “fish” is far more complicated than we think. There are primitive fish without eyes or fins (e.g. lancelets), evolved fish with lungs (e.g. lungfish), and advanced form (e.g. coelacanths) that might have already landed
and transformed into amphibia, reptilia, avis and mammalia, which are organisms with appearances completely different from fish. What are the features of a fish? The key feature is the formation of the axial support structure, “notochord”, and the calcified structure “vertebra” that later replaces the notochord. This causes complete changes in the operation between “chordates” and “vertebrates”, and draws a clear
division between “invertebrates” and “vertebrates”.

It is doubtless that ancestors of “fish” evolved from one of the chordates. Palaeontologists and ichthyologists
believe that fish derives from annelids, which consisted of body segment structure and still exists today. Sequential morphological changes have not been found on fossil evidence yet. But chordate fossils such as Pikaia gracilens have been excavated in Burgess Shale at Mount Pika in British Columbia of Canada. The fossils date back to more than 500 million years ago. It proves that among Urocodata and Cephalochordata, Craniata is the earliest ancient “fish” and became ancestors of all vertebrates.

In the early stage of evolution, transformations in fish include the development of a single notochord into multiple vertebrae, the head becomes obvious, separation of the brain and notochord within the central nervous system (nervus centralis), formation of cranium to protect the brain, formation of paired fins and so on. Early fishes include Myxinomorphi (70 of which still exist), and
vertebrate fishes such as Petromyzontomorphi (38 of which still exist), Conodonta (extinct), Pteraspidomorphi(extinct), Anaspida
(extinct), Thelodonti (extinct), Osteostracomorphi (extinct). Most of these early fishes are filter-feeding and benthic-dwelling, which
make them rather unobvious, but they share the common feature of being jawless and possess opercula (gill cover).

In the next stage of evolution, jaws appear in fish. They are now called Gnathostomata, and Placodermi (extinct) is the earliest fish with jaws. Fossils of Placodermi date back to mid-Silurian period (444-416Ma), but recent research shows they could have appeared as early as mid-Ordovician period (488-444Ma).

Jaws are thought to be the synthesis of front gill arches. Jaws greatly alter the feeding habits of fishes and increase their feeding efficiency, allowing them to outnumber invertebrates in the vast ocean. 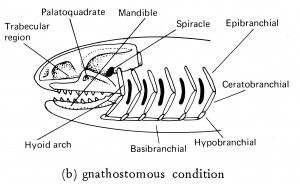 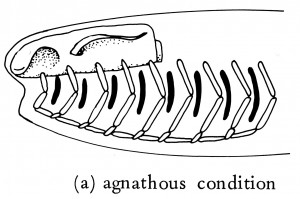 The prime era of fishes

Fossils show that fish enter its prime time in Devonian period (416-359Ma). Jawless fishes include Pteraspidomorphi and Osteostracomorphi. Gnathostomata include Placodermi, Chondrichthyes (cartilaginous fishes) and Acanthodii. There
are also lobe-finned fishes such as Coelacanthimorpha and Dipnomorpha.

In later Devonian period, Amphibia evolves from lobefinned fishes – it is the first kind of fish in the form of a
tetrapod. Well-known fossils include Eusthenopteron in Rhizodontimorpha of lobe-finned fishes, and Ichthyostega of Amphibia. They already have heads, limbs and teeth similar to that of ancient tetrapods.

The evolution of fishes in water and present fishes

Since Devonian period and Carboniferous period (359-299Ma), fish has evolved differently in water and on land. Except the remnants of lobe-finned fishes, fishes nowadays are evolved from ray-finned fishes (Actinopterygii). Over these three hundred million years, many of them have emerged and disappeared. Chronologically, there are Cladistia, Chondrostei, Neopterygii, Lepidosteiformes and Amiiformes.

The ancestor of existing fishes did not appear until mid or late Triassic period (251-200Ma). Teleostei
is the largest infraclass of ray-finned fishes. There are around 26,840 species in them – 96% of the total species of existing fishes. They include Osteoglossomorpha, Elopomorpha, Clupeomorpha and Ostaryophysi of Clupeocephala, and Protacanthopterygii and Neoteleostei of Euteleostei. Fossil records of orders under Clupeocephala found so far are estimated to be in Cretaceous period (146-66 Ma).